So I’ve noticed that certain intersections cause huge lines of traffic because the trucks stop and teleport to the other side of the intersection and then continue, sometimes the trucks just disappear when doing this. I’m not sure why but it happened when I replaced the concrete road with a highway to keep the road the same.

Yes, this currently happens when changing the road layout. It’s on our list!

Saving and reloading usually solves this problem, either they will load with the new paths all right or simply disappear the entire line. Both ways, problem gone.

One of my cities, though, the suppliers (in this case for computers) were so far away that reloading made the queuing lorries disappear, then the factories did spawn new ones, but they didn’t reach the habitats in time for demand, so they downgraded, then lorries despawned middle way, then more downgrading, death spiral of h*ll. They went down all the way to first level. Had a heck of a time managing workers percentage so they would reupgrade.

Just uploaded a fix for the stop-and-teleport behavior when the road layout change. Now they should reroute seamlessly or despawn if they can’t find a route.

Hello everyone! Train Update Release Date I’ve seen a lot of people eagerly waiting for the train update, so I wanted to give you a release date: Alpha 8, the Train Update will come out in 2 weeks, on Friday Dec 10th! I spent this week getting trains to move on their rails as well as setting up train lines. We’re going to need next week to handle train signaling so they don’t drive through each other all the time. And finally, we reserve the last week to clean up the feature, add description…

I see your traffic problems and raise you my own 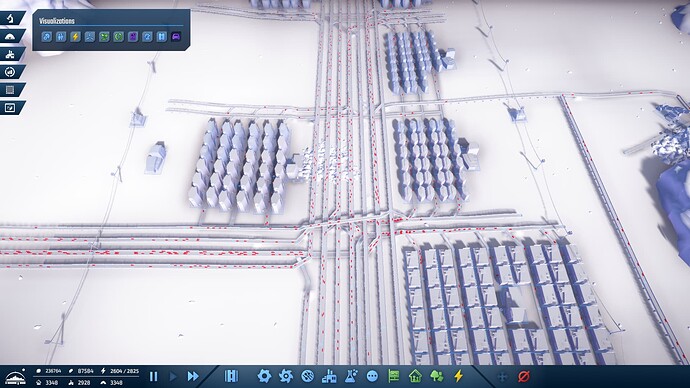 I now know how I get it fucked up - up north I had a district that exclusively exported Computers, when I deleted that district all the excess home appliances and electronics went rushing towards the main city and clogged it up

I started a new one, this time I’ll do it differently

but we still need alternative transportation

No, I totally agree with alternative transportation… I’m playing on hard/hard and it generates an insane amount of traffic. Every time I add a new block of factories, it still creates massive backups when it initially stocks them with resources.

Looking very much forward to trains!

Forbidding out-of-intersection U-Turns and enforcing lane discipline should alleviate the problem. My major problem (on hard/hard) are the “wavy” jams that appear in large stretches of highways due to lorries randomly reducing speed in order to change lanes and/or make u-turns.