Thanks for letting people test your new game. As requested, here is my feedback/bugreport:
-You can build on roads, blocking traffic and creating a bottleneck.
-The game asks you to build an airProcessor. In game it’s called an Atmosphereprocessor
-If you build the habitat too close to the road, food will never be delivered. Oxygen will. But no new people can join. Other buildings also have this problem like concrete factory. Nothing will get delivered if they have a short road to the main road. Vehicles just disappear.
-You can place buildings into each other in some cases.
-If you place a building at the very end of a road, it will produce but nothing gets delivered.
-If you place a circle road, nothing gets delivered to the other side of the road. (screenshot) 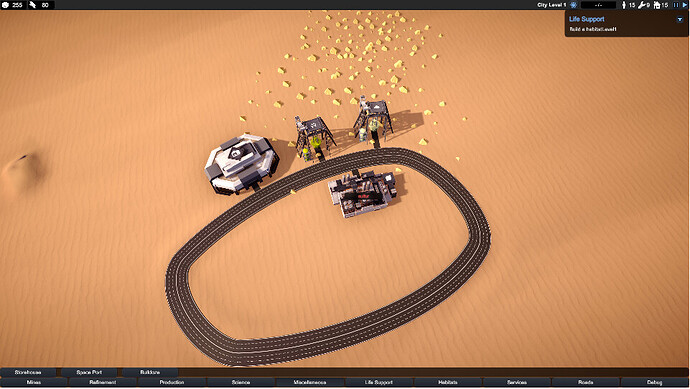 2961×542 129 KB
-The build-bar is placed such that you will accidentally scroll a lot.
-If you connect default roads to 3 lane roads they can get bugged placements and graphical artifacts.
-Vehicle AI is far from optimized although I think that will get better as the game progresses.

I am however impressed in that the Alpha already has nice graphics in-game and the basic systems are up. I will be updating this post when I find new bugs.

Thanks for letting me test this.

I found the same bugs as above except I was able to get past the 17 people (I built an extra habitat), in addition to the above I found:
I was able to zoom in below ground level - Blue screen.
There was no mention of farms in the tutorial but I got past this.
The tutorial didn’t help me find the research area, until this point everything was accessed by clicking on the buildings - it took me some time to find (maybe just me).
It would be helpful if there were some tips/text that tells you for example (the air processor will generate air for 20 colonists or the farm will make enough food for 20 colonists)
We have food and air, should we also find a water source?
Its probably just because its such an early version but it would be nice to know why we are building item (like “Your colonists will starve if you don’t build a farm” or “Your colonists want to speak to people back on earth, build an electronics factory”.

Right, back to the game and try to reach city level 3.

For me the count in habitats stay 0. Oxygen becomes full. Food is never filled even though I have 2 basic farms. No matter how many I build. No new people.

I have no trouble getting people, I have 120 now.
I found it better to move my building a little way from the road, they join automatically if not too far away and it helped me to see where the traffic was going.

This might be the case with me since I have it very close to the road. Will try a new play.

EDIT: Yes that was it, thanks. Updated bug report.

Welcome.
If you get the point where you need computers for your habitats to upgrade, let me know how you manage to get enough electronics supply please?

Have managed to get to a Pop of 270 but it seems to cap out there. Electronics are a real challenge and i haven’t found a proper balance yet with 7 electronics, 3 microchips and 3 computer factories.

Also, it seems that the Sci1 packs will go to the research lab but not the Sci2 lab, which means i cant get past the first City Lvl4 reaearch.

The big challenge for me is i have a constant refresh flicker no matter the graphics settings. 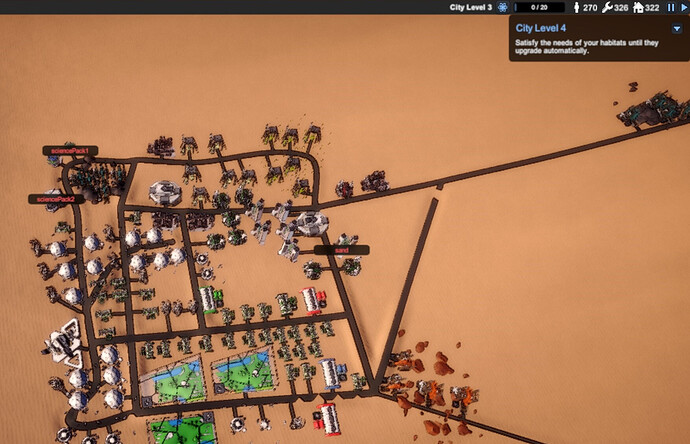 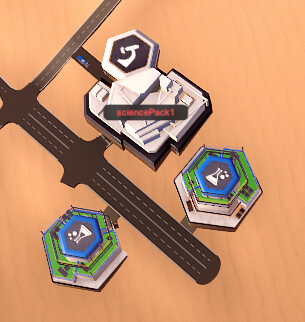 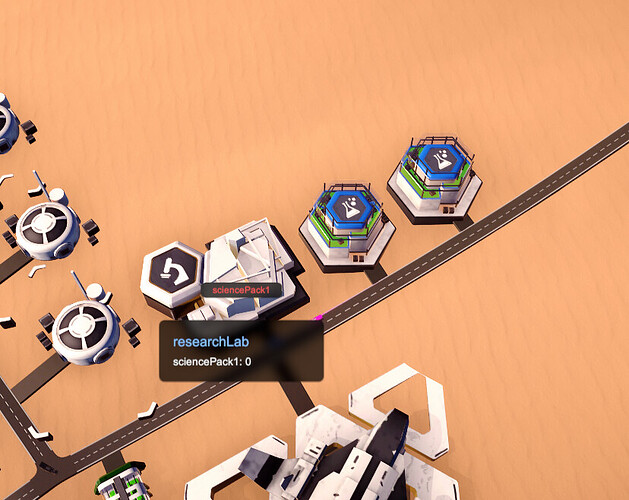 When building two, close to perpendicular, copper mines next to a default road triggers a road connection to the default road and each of the mines which makes it look like there is a piece of an access road sticking out of the default road.

Also, I’ve noticed a few very rare instances where cars flew off to the right and disappeared when making a u-turn at the intersection with the two copper mines and default road.

Heyo! Thanks for all the reports, guys!

Some of these are already known, but I’m putting all the new ones on a list to be fixed for the next Alpha.It would be very helpful if you could send me your saves for some of these issues, so I can investigate them. Especially:

@mmroos1983 could you a save demonstrating this:

If you place a building at the very end of a road, it will produce but nothing gets delivered.

@QW11N could you a save demonstrating this:

Also, it seems that the Sci1 packs will go to the research lab but not the Sci2 lab, which means i cant get past the first City Lvl4 reaearch.

@OsitaGominola could you send a save file that contains your bugged roads?

@Breriz could you a save demonstrating this:

Also, I’ve noticed a few very rare instances where cars flew off to the right and disappeared when making a u-turn at the intersection with the two copper mines and default road.

The flickering has been reported and will be looked into either on Sunday or on Monday! Your main menu will tell you when an update is available.

For this version Alpha: If you have cars disappearing, try using one-lane roads until we fix it.

You can find your save files in C:\Users\YOUR_USER_NAME\AppData\LocalLow\DionicSoftware\InfraSpace
and you can send them to me for investigation at daniel@dionicsoftware.com

Thanks for your reports and your feedbacks! I hope the game is fun

Hi, I’m really enjoying the Alpha so far. Only bugs that I have come across are related to cars disappearing on multilane road. As mentioned above, converting to a single lane usually fixes it or only placing buildings on one side of the road.
My 957 person town below. 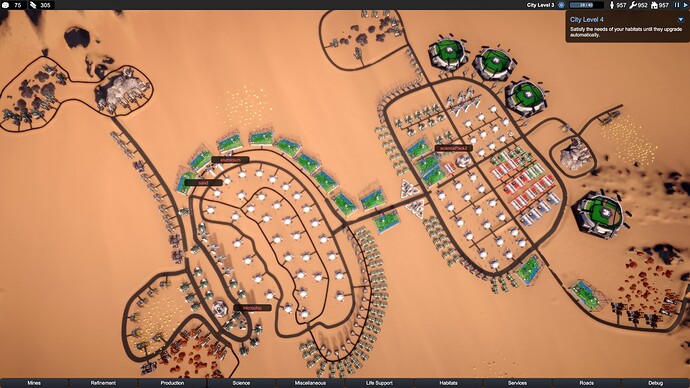 That’s a large city @Saip, good progress! Would you mind sending me you save at daniel@dionicsoftware.com, so I can use it for performance stress testing? Thanks!

when placing a cement factory down, the screen flickers from normal to black multiple times to an extent I can not play the game.

the same issu happens to me

Bugs i have experienced so far are:

No problem. Quite busy today. Will send tomorrow.

Production of all mines and factorys stopped. I think it might be the ammount of mines i placed: 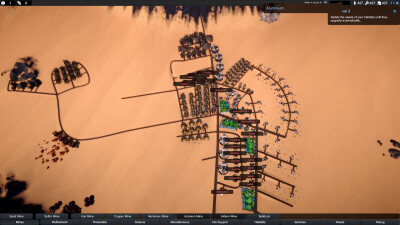 If you cant see it on the picture it is: