the time has almost come: Next Friday we’re going to release the traffic lights udpate with configurable traffic lights, traffic signs, UI scaling, grids, and more. This week, I’d like to introduce you to a gameplay change:

Arenas used to “produce” culture and then deliver that to the habitats like any resource. From now on, arenas, parks and schools will have an area of effect to satisfy habitats needs for culture, relaxation, and education: 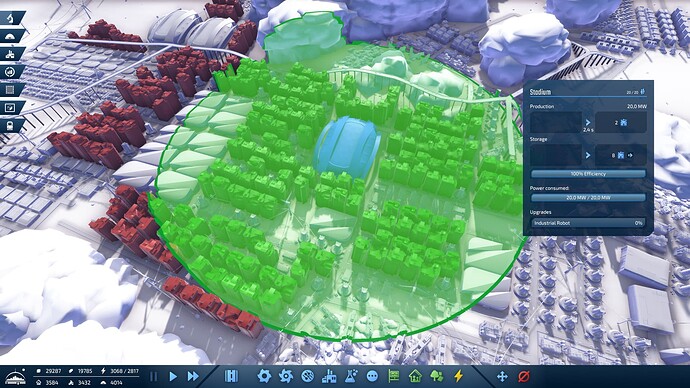 Our character side project has been progressing nicely. Let me introduce you to our female colonists: 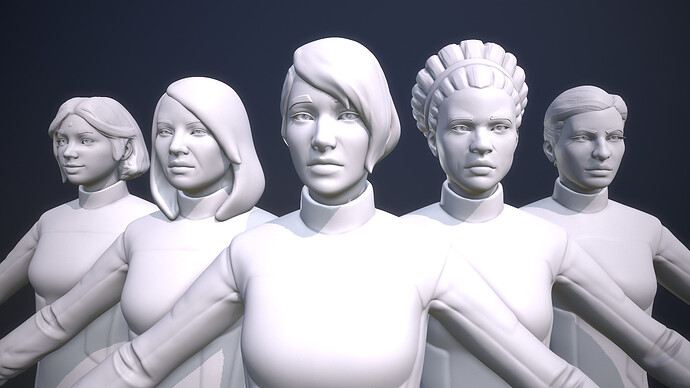 For now, the colonists will just inhabit the habitants and give the game some detail. In the future, there might be more human-centric plans that are not on the roadmap - just a little extra from us

And finally, thanks everyone for all the comments on grids! I think I should ask more questions in Friday Dev News because the participation has been great.

We decided to go with a global grid for now because it’s easier and most people want that. But, there is a twist: You can not only toggle the grid, you can also rotate it by 45 degrees if you want! That can make building more interesting cities a little bit easier:

(You can still build with grids turned off, which is how the infrastructure on the screenshots above were made.)

If all goes according to plan, we’ll be able to release the traffic lights update next Friday and until then - happy playing!

Will the stadium area be necesarry?
I don’t think other players who played the game for months will like this change. They(and also I) will have to remake their cities!
If this will be implemented, will there be a new button in “Visualisations” for this?

(Hopefully this is gonna see some people.)

After the update, pause the simulation and rework your city to accommodate the new rules. You may want to stockpile building materials or clear some space in advance.

From a story perspective, it makes more sense for parks/schools/culture to be in the vicinity of residences rather than shipping products to the people.

These city breaking changes are sometimes annoying, but given the game is still in development understandable. The longer release cycle we have now avoids having to rip up your city every week.

It would be cool if the citizen decide when they are ready for stadium etc when they want to level up. And the citizens decide the best location for this (compatible with your created infra or not) and You just have make it available for them.

Could you tell us the radius of the area of effect for these three buildings so we can design around that?
If you could use units of residential buildings that would be very useful.

That the effect of this “area effect building” is so small that only three buildings fit in that area?

Please add a large area of effect, otherwise there will be too many stadiums/parks to cover all houses.

Enjoying the game a lot so far. Great work!

First: Hello! I made an account extra because of this topic =)
Second: Great game so far! (I own it on GOG)

My post (which is also on Steam):
While I like the other ideas for the patch (plus the new stuff from the other Friday Dev News), I think it is a let down that the buildings get an “Area of Effect”.

Although I was sceptical at first about the traffic management, the game is a real blast in this regard! That’s why I think it would be really cheap to abandon the current system for the “civil service” buildings.
Especially since Corona started many people work -or at least worked for a time- from home. The school comes via PC to the students sitting at home, sport events, exhibitions, … many were virtualized and/or “consumed” at home. Therefore I liked the way it is very much.
Furthermore, in the real world there is often no school right around the corner, even less a stadium (some years ago I worked in food outlets of stadiums, they were never in the city, and needed to cycle quite a bit to reach my school and university).
They are in the next town or at the edge of the city, often only connected via tram or motorway.

Parks on the other hand, yeah, if you see them as “relaxation area”, then I give you that, this is not so easily shipped (except you take food (delivery service) or cinema (streaming) and such into account).

Therefore I think it is great that they generate traffic! I would rather suggest that you increase the traffic and/or make it so that houses spawn traffic too going to these buildings, instead of the AoE.

I saw some people complain about the area Effect of culture.
My Idea is that culture,education, parks etc. Have People drive to them and you could implement a bus system which lets you minimise the traffic

Such a thing would be great. Even without buses, cars (like the ones from the spaceport) or trains (like in the real world) can be used for this.

I think that the AoE itself is not needed, because its the traffic or rather the management of it that counts. So if I want less traffic on the Highway I build them in/closer to the city, if I can handle traffic on the way to the hubs, I build them farther out.
With the AoE-system the cities get more generic, gain the same quite ugly pattern like in many other city builder games - pattern like “5 houses then a church, one house, then a firefighter station, etc.” just to get a nice AoE overall.

I hope the AoE gets removed/changed down the line.