So with the new pipes update - I like many other have been trying to switch to pipes - except I see that all my water pipes are getting -33% LESS and not only that - every building connected to them is ALSO 33% LESS efficient?!? My Nanotube Factories should not be getting a 33% penalty because they are over filled with water (even though I’m having to use more pumps). This penalty on ALL water buildings connected with pipes is not a good mechanic… someone got lazy on that and just did a blanket penalty for pipes (which should NOT have the penalty in the first place!)

Pipes are MORE efficient - not LESS - so no penalty should be applied.

A small update a couple of days ago removed the penalty from consumers, but producers will still pay the pipeline operation costs.

If pipelines were completely free and provide instant delivery without any drawbacks, we could just skip roads and trains entirely and make a game where you only place pipes and instantly win - hyperbolically speaking

Well that is fair I believe - if my factory gets the water slower yet is still able to produce at 100% when it has water then this makes sense - it would mean I would have to provide more pumps and/or more providing infrastructure, and as long as the factory has the ingredients can produce at 100% (since it stops already when missing items)

Again thanks for info and glad you took the time to send a quick response.

TLDR
I feel what would make more sense is that consumers connected further away from producers would have an efficiency penalty. For a richer gameplay, different fluids could cause different efficiency loss with distance.

Story Time
A common model used IRL for pressure drop (energy loss) in pipeline systems is the Darcy–Weisbach equation - Wikipedia which relates the pressure drop to the length of pipe a fluid travels by a dimensionless constant determined by:

Goin too in-depth on the physics simulation is def overkill, but adding an inverse relationship between efficiency at the receiver and distance traveled would create interesting game dynamics where building local production close to consumers would be preferrable to one big central plant array that just distributes via pipes. IDK, feels more satisfying that way.

So being a game you have to base “some” of it on reality principles. And yea, doing some fairly easy ratio simple math with the buildings is a nice challenge - though when you start to need a wiki / calculator / heavy spreadsheet just to get a building to work - that not a game anymore, that is a job. I have one of those already. The last thing most casual players want to do when they get home, feed their kids, take care of chores, get other real life things done - is sit down with .657 of something and 1.14138457854765 of something else and blah blah blah and then finally make my Home Robot Factory after 2 hours.

So many factory / logistics go this math route once pipes are introduced and for many casual games like myself - we just pass and just move on to the next game. Now they have my money already, so Dionic can do what its wants I guess lol

You say it best - “Goin too in-depth on the physics simulation is def overkill” - yep, it is - its a game and this is not GTA5, I’m fine with it not being super-realistic

The last thing most casual players want to do when they get home, feed their kids, take care of chores, get other real life things done - is sit down with .657 of something and 1.14138457854765 of something else and blah blah blah and then finally make my Home Robot Factory after 2 hours.

Haha for sure, I feel the same way about it. That’s why I added the TLDR:

I feel what would make more sense is that consumers connected further away from producers would have an efficiency penalty. For a richer gameplay, different fluids could cause different efficiency loss with distance.

The math stuff is just me being a nerd

and offering some hint of a possible solution for @Daniel and team.

Thanks for the video nod - I appricate it

and doing the Live Stream of it next week should be fun!

Your comment doesn’t really make sense.
Pipes are an upgrade to the normal system so it should actually feel like an upgrade instead of an downgrade.
Maybe make pipes a harder difficulty to unlock like blue, green and yellow science before its avaible?

What if the producers loose the road requirement if they are connected to the pipes network?

I like this one. Makes more sense this way

What if the producers loose the road requirement if they are connected to the pipes network?

So one of my viewers mentioned an ongoing cost to pipes instead of trying to apply a penalty - so here the comment I left for them:

If I carry buckets of water to my pool to fill it vs. putting in my garden hose obviously the hose is more efficient

Having pipes cost efficiency is ridiculous. Really, its almost like they don’t want people to use pipes and keep using the old, inefficient, technology.

Striving for maximum efficiency
I feel like there has to be a different way to balance pipes.
As someone striving to always optimize and keeping production rates correct (building ratio) Seeing the efficiency suddenly drop makes me cringe and I have to add more buildings to keep up. I am basically trading logistics problems with space.

Logistics challenge
I personally do like the logistics challenges that I have to solve with InfraSpace. Pipes feel like cheating and give me a bad feeling about my efficiency at the same time. There is no logistics challenge with pipes, you connect the production and consumption sites and you are done. Resources more or less arrive instantly, taking away any challenge to solve.

With the game offering me no way to store anything in between (like a depot), any external gathering of water or oxygen also forces me to lay long pipelines, instead of using a mix of logistics.

Explaining the penalty ingame
There is no explanation ingame why there is a penalty. Using pipes feel more like a downgrade than an upgrade, having put all the resources into researching them. All of a sudden I have to rebalance my factories, that were perfectly balanced before.

It would be really nice to have a list of positive and negative influencers that change the efficiency on the building info panel.
Things like:

It would be really nice to have a list of positive and negative influencers that change the efficiency on the building info panel.

Hover your mouse over the percentage to see the list 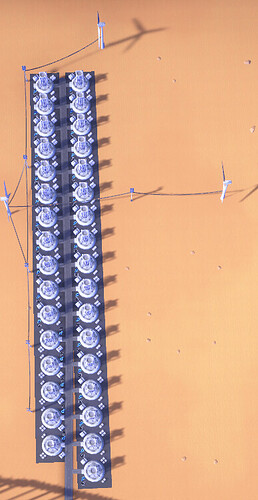