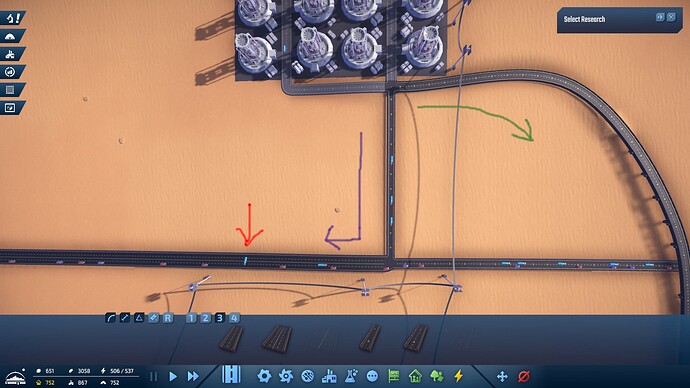 See the spot marked in red!

I have those O2 buildings feeding a large block of habitats to the right (the way marked by the green arrow), and I also wanted they to provide carbon to my research and steel facilities to the left (the purple arrow).

However, those clever O2 lorry drivers have found a shortcut, and instead of going the right way, are now doing those crazy maneuvers in the middle of the highway!!! 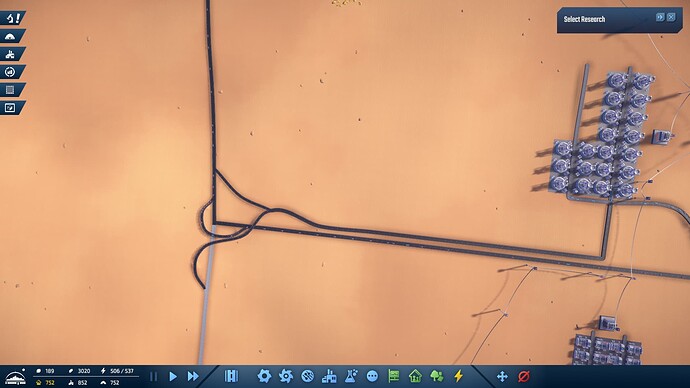 Another path finding problem, probably related. The lorries seem extremely unwilling to “take a right to go left”, or a left to go right. See those pics: 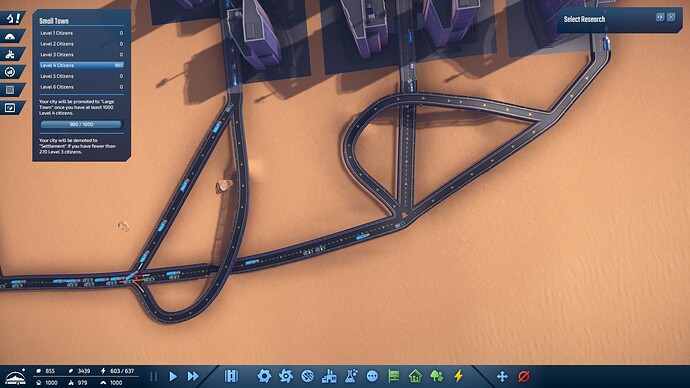 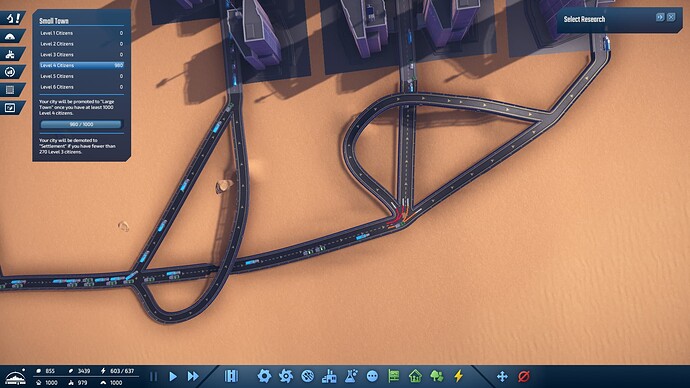 On the first intersection, they will not take the right off-ramp, but rather change lanes (causing congestion) just beforehand and take the left ramp - there is no node there, and they change lanes all the same.

Same thing, with sides changed, on the second intersection - they will never take the left off-ramp, just change lanes in order to get the right (but quite wrong) ramp.

Decoupling the left off-ramp didn’t solve the problem. They are still ignoring the ramp and changing lanes to get to the rightside path. Now they are changing lanes after the ramp. 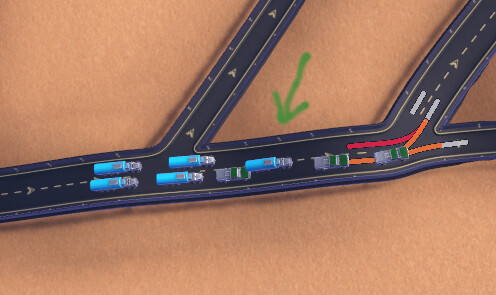 Now, this inverted the problem. They are again changing lanes beforehand, in order to take the left ramp and avoid the elongated rightside one.

I (kinda) solved the jamming problem by dividing the food/O2 flow by three before merging them to deliver to the habitats (marked red in the pic). Will work for now, but I probably will have to split that 6x12 habitat block into two 6x6 ones in order to cope with the increased demand when they next upgrade.

On the other hand, I just caught a bunch of derelict lorries taking the scenic route (marked in green), which include an U-Turn in the middle of nowhere… 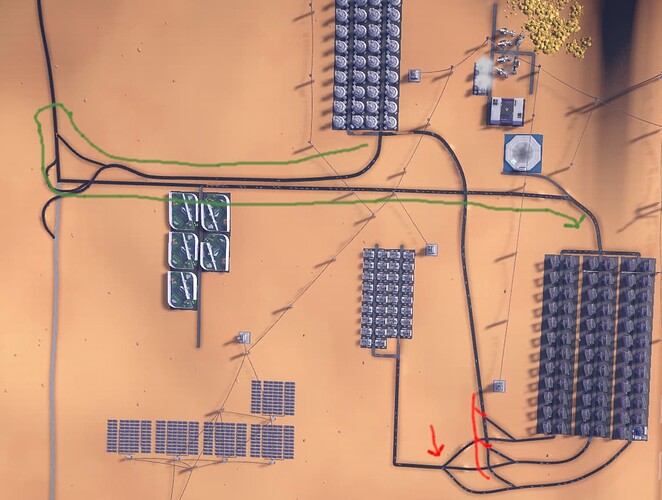 Talking about this post: Undue U-Turnes on Highways - #3 by cpeosphoros

I think I see what you’re trying to do, but is this something you see in real life? Turning left lanes on both side on the highway? With cars being forbidden to change lanes on the highway?

Not saying your thought process is wrong, but we probably should implement realistic solutions if possible.

I see why you have so much traffic with so few inhabitants. You have all the production in one place and bundle it all through one road to deliver it to the habitats. Imagine all the houses in your city were in one area, all the offices + shops in another area and they were connected by one road. That’s a ton of pressure to put on one road.

It works better if you mix houses and deliver goods into a living area from multiple directions.

. You have all the production in one place and bundle it all through one road to deliver it to the habitats […] That’s a ton of pressure to put on one road.

Yes, and that’s on purpose, to try and stress your path finding/route system.

As for realism, I’d be playing Cities Skylines if I wanted that. I’d rather toy with sci-fi here on your indie game, lol.

As I said in the other thread, far from me to tell you how to prioritize developing your game (which, again, BTW, is a lot of good as is). I’m just trying to highlight some corner case problems with your algorithms.

Ahhh, thanks for the info, that helps me categorize your feedback

Congrats on the hard/hard win!

In that case from a high-level game design answer.
There are 3 reasons for traffic:

You can deal with 1) by changing your layout and 2) by building off ramps and stuff like that.
3) is just a max throughput limit on a single road and once 3-lane superhighways are not enough (which is typically past the current endgame) and you don’t want to change the general layout you’d have to use trains to transport so many goods on one route.

I think I see what you’re trying to do, but is this something you see in real life? Turning left lanes on both side on the highway? With cars being forbidden to change lanes on the highway? 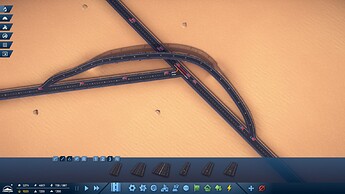 This is a realistic junction (off-ramp on the righside lane, in order to minimize tension on left hand conversion). The lorries are ignoring the ramp and making an u-turn one node downwards from the prohibited left turn. They are not even taking the shortest path - which should be taking the ramp. I guess this is a legit bug.

EDIT: They started taking the ramp after a while. I guess the ones ignoring it were created before I built the ramp, so their path was already set for the lefthand turn.

EDIT 2: Saving and reloading the game will instantly apply the changes (and as abonus stop the halt/teleport thing). It seems the game only saves the vehicles’ destination, not their paths. @Daniel, maybe we could have a “flush pathfinder” button in the game, that would just force all vehicles to recalculate path? I understand that would be a quite cpu demanding process, but, well, so is saving and reloading…