This intersection among others has stopped the whole city. Its a big city.

The leading trucks are just sitting. This constantly leads to a gridlock.

If the purple truck would just go, the whole city would eventually start moving again. This happens at many intersections. Trucks will just sit in the middle of the intersection and block the rest of the grid.

I see that there has been checks put in place and trucks are removed if they are in intersections, but it seems if a lane has an intent to go even if there is no space, the rest of the traffic will not go. This seems to resemble always having a green light until there is no traffic left in the lane. 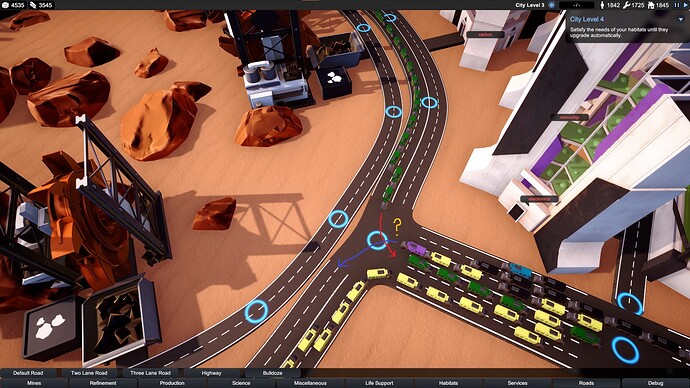 Overview of gridlock. The whole city is jammed. It was running very smoothly, with lots of manicuring to keep trucks out of insections, for hours. 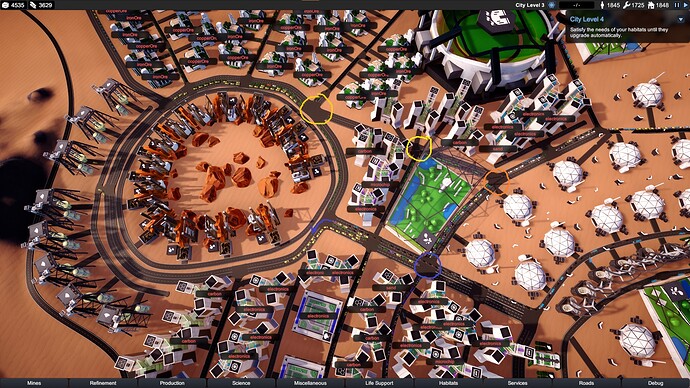 Hei there, can u do a triangle ( working almoust the same as an roundabout)? this way the cars comming from left will not pass the big intersection and go right … also… seems that violet truck is going to habitats( it is loaded either with computers or with VR)…
I am running a 1000 people city and i managed to have only double lane roads beacause i was trying to make traffic lighter by making carbon and sand trucks going from start to production without having to crossroads with copper and metal…
Ps i also had that problem with a truck jamed, so probably he wants to do an U turn 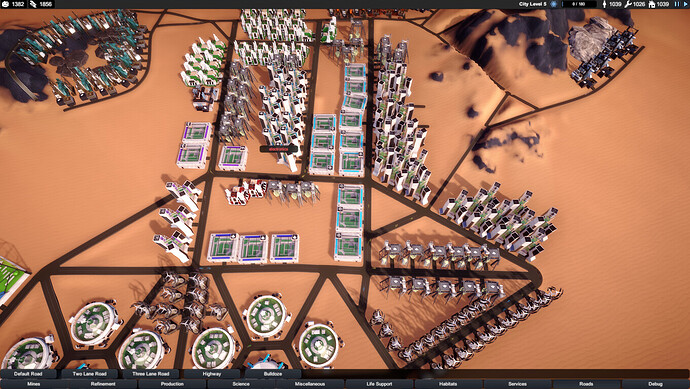 I appreciate the tip. I’ll try it. Yes, mainly traffic jams have been caused by a truck trying to do a u-turn on a crowded road and stopping all other traffic until it can.
I’m suggesting this change: if the truck cannot do a u-turn without blocking traffic then it must go to an intersection and calculate another route or continue to road end. I understand this is hard to script because every node on a road is considered an intersection. However, I believe it would solve the main problem in an otherwise amazingly programmed transport simulator.

I’m honestly suprised your triangular city you have shown works. Every time I use 2 or 3 lane roads as the receptacle for goods, the goods disappear. I also can’t seem to get enough nanotubes to handle the neuroprocessor facilities.

@Diversiam seems like the reason for this traffic jam is dumb truck behavior, right?

Could you send me your save so I can check it out myself?
It’s in C:\Users\YOUR_NAME\AppData\LocalLow\Dionic Software\InfraSpace\saves
Thanks!

there are 2 issues here

@Daniel Yes the truck behavior has taken some getting used to. Although quite impressive in of itself.

I have significantly changed the city since this post but I would be happy to send the file. It is now in the 2.5k pop range and seems to be running smoothly after I have figured out the truck quirks.

@Arminius I have noticed the road node remaining. I have found that trucks disappearing mid road can be solved by putting a small side road as an offshoot from the troublesome node.

Yeah, that works but i dont want to have those things in my city :)))