During my playthrough I have come across the three following points when trying to use trains in order to transport goods.

As players of different games using trains might know, a block is what is commonly used to have trains not crash. Each block of a railway must not hold more than a single train is the base principle.

In infraspace it is handled a bit differently in that non intersection blocks can hold as many trains as possible and intersections are a single block.
This causes some issues where two lines that wouldn’t technically be intersecting cannot go through an intersection at the same time which heavily slows down the traffic. 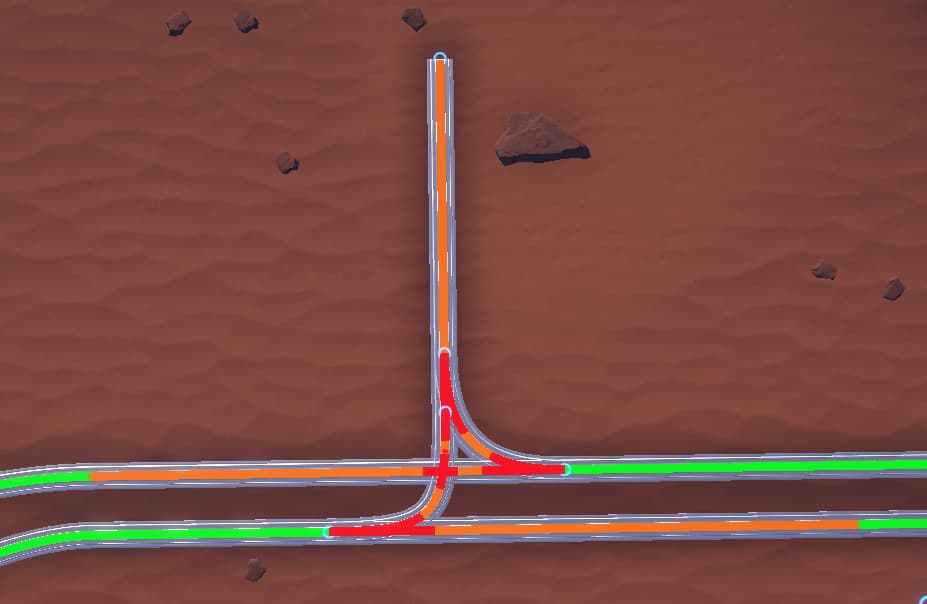 if you think of the left and right goind railway as the main railway and the line going up as a sideline, the trains of the main line will always wait for each other when passing.
In this example you could obviously just take the one line over the other and have it split into different blocks but that takes a lot more space and for bigger intersections proofs very impractical.

The main issue here is, is that there is no way to split blocks without having at least a trainlength of rail between the two blocks. This avoids the need for chain signals since an intersection can only be entered by a single train so crashing is impossible. But also causes a drastic inefficiency for the railway.

My suggestion here would be to well add manual signaling with chain and block signals that should be optinally useable by players who want to experience maximum efficiency with the railsystem. While this causes the game to be less unique in the way the trains work it also drastically increases qol when working with trains.

In my playthrough I have my concrete factory in the north and steel factory in the south because that was perfectly fine prior to the space ship building.
I have now placed a spaceship construction facility in the center of the map and transport goods there via rail.
The issue here is that the building will request no more 30 of it’s needed resources however the time the materials take from factory to building is more than the production time for 30 resources. This causes the building to be idle most of the time even though steel and concrete is produced way more than needed - but just being delivered to warehouses.
If I use a single train which would be enough to transport my production, 400 materials would be transported to the train station at the building and then 30 steel added to the facility and 370 stored into the construction material storage. (If I remove the storages nothing but 30 items would be transported by the train)

My suggestion here would be to add a building to store items. This would long distance transport via rail or road to buffer items into said building and then have them delivered to relevant factories from the “warehouse” or similar.

My main issue with train stations is that there is no way to have asymetric stations.
Sometimes I would just like a 2 rail mono direction station but have to place a 4 rail station and not use the other 2 lines.

I haven’t used trains enough to fiddle with blocks, but you make some solid points!

I would love to see storage buildings to help keep long distance good transpiration streams steady or to use as a buffer within my production lines larger than 30 * the number of buildings I have of some type.
I would also love to be able to change directions of train lines in a station.

For me (average train knowledge / user), the storage buildings are highest on my wish list