unsure if this was intentional or not.

My other general piece of feedback is there seems to be a slight disproportionate balance on the need and efficiency of electronics production. i seem to be able to get ontop of most resources but electronics seems to need a significantly vaster amount of factories

Current Game place: i am level 4 with 1900 citizens

Hi Cobba, thanks for the feedback!

If the carbon processors were filling up their outgoing storage and stopping production because they’re full, that’s a bug. You can send your save to me and I’ll investigate the cause (daniel@dionicsoftware.com).

If the carbon processors don’t fill up their storage, you don’t produce enough to cover the carbon need by those processors alone.

Yeah, electronics quickly becomes the backbone of your economy. If you reach level 6 I’d love to see a screenshot or a save to see how you ended up doing it

The carbon processors were filling up and stopping because they were full, once i switched out all the atmospheric processors i haven’t had the issue since

another bug i have found is sulfer mines don’t always like one way roads, the trucks will come out to the road and disappear, i’ve had to use 2 way roads in some places where i’m mining sulfer

and also had some inconsistent problems with simple farms, i had some houses that were short on food but plenty of farms that were full and not emptying out, i just found myself destructing the non productive ones and rebuilding the houses as well

The push to level 6 seems scary… so much to manage

For every bug it would be super helpful to have a save where it’s happening, because when I try it, it usually works. You can find the saves by going to the settings menu and clicking “open screenshot folder”. The saves are next to the screenshots.

i have just sent you one,

seems with the sulfer and the one way roads it only happened with small mines, large are fines

also when i was playing earlier i had no issue with good meal supply, i load up the save game a few hours later and every residence is battling for a good meal 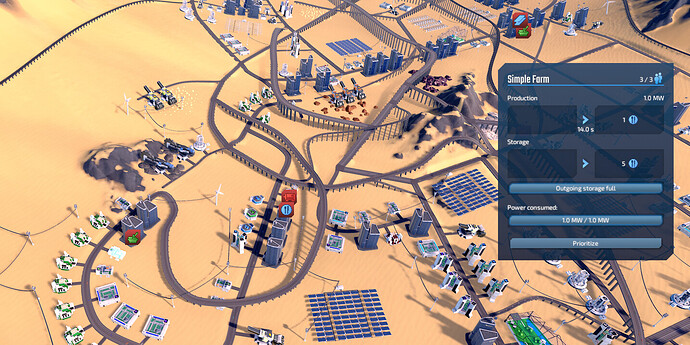 If you think it may be a bug, you can send me the save for investigation (settings → open saves folder → daniel@dioncisoftware.com) Thanks!

I do think it’s a bug but I haven’t been able to locate my save file. The option to save to the steam cloud was selected but I have cleared that selection and saved again. But still can’t find the save file.

I found it - sorry for being dense. I’m emailing it now.

My email failed to get delivered. I received this message:
Delivery has failed to these recipients or groups:

Sorry there was a typo, I was also dense

I believe the email went through this time.