I have to start with congratulations. Your team has created another great game that I would / already have played many many hours. Both Founders Fortune and this Infraspace Alpha has entertained me immensely. 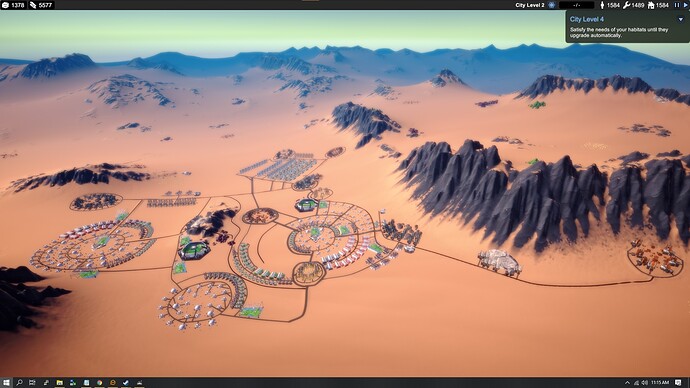 Thanks for the nice words and the feedback!

Most of the points we have already on our list in some form or another. We’re hoping to eliminate u-turns by making proper left turns into side roads for example. Check back in a couple of weeks and see if it has gone in the right direction

That would be great to not require u-turns (EDIT: I’m also rethinking this, will post further later tonight).

As a side thought: I noticed the consumerProducers for buildings are choosing nearest producers when first placed. But are not necessarily updated when new road structures are laid (EDIT: After further debug I’m wrong about this). I know this is a more advanced request but will it be possible in the future to explicitly select producers for buildings?

I’m rescinding my #4 “suggestion”. It would be great to get consensus on this from others who have played for a while on the alpha. Be prepared, this is verbose.

Devs, by all means, do not take anything I say as a complaint. I am enjoying this game. Just love to help or improve things where I can

Prologue
I’m finding the traffic simulation in this game to be the biggest part of it and the issues I’ve noted before have become more of an interesting test of resource management rather than bugs or issues. Here is what I mean:
When I started, I looked at this as a colony building sim. The trucks moving the resources were just an A to B mechanism. I’ve now found that the traffic management is the main part of this game. Inefficient road structures that don’t handle the inbound and outbound correctly will bring everything to a halt. This will result in pissed off colonists and the truckers’ union coming after you.

U-turns
After trying different traffic management tactics (@Arminius) and multiple days of play I have found that this could be a special mechanic instead of an issue. The fact that trucks waiting to u-turn stop their lane brings a Factorio feel to the game. The player must bring in the resources from different directions to avoid this from happening or find a way to redirect these trucks. I actually would like it to stay. However, it would be nice to know that is why the truck is stopped, otherwise it just looks like something is wrong. Maybe put a blinker on the truck model?
Maybe U-turn trucks should stop traffic, but move on after a period of time to the next road node? That way it will hold up traffic but not make it so we have to delete the road full of resources in order to get things running again. 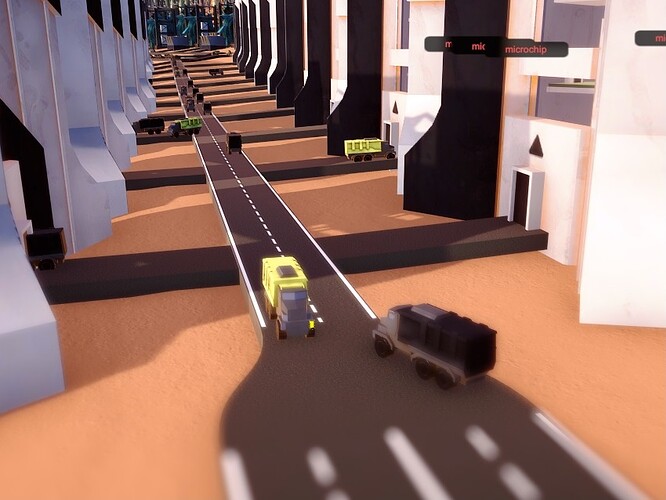 I found u-turns to be troublesome because of an issue where I could only use default roads otherwise the trucks would disappear. When using 2 or 3 lane roads, u-turns don’t hold up traffic and make the management more exciting.
Note: After debugging, I noticed this is because of the truck jumping to another road (side road?) object on the intersection node that doesn’t actually exist. By connecting a small, no outlet, 1 lane side road on the node it seems to reset and the trucks don’t disappear.

Intersection management
Trucks only seem to continue through an intersection if there is a gap in the other traffic. Could their be a timer per lane or on the forward and backward lanes to make one connection stop and let another go? If this is a no go. I would suggest One-Way roads so we can make infrastructure for continuous flows of resource trucks that don’t stop other trucks from continuing through the intersection.
Do trucks incoming from a highway take precedent over 2 or 3 lane roads?

About truck traffic and u-turns. If there’s an area that they travel a long distance only to u-turn, I make a very small default side road so they can have an opportunity to u-turn before intersections.

Thanks for the feedback

Direct response: We’ll implement left turns and that might change how trucks behave and what kind of traffic issues players need to deal with significantly. Since it might change so much, we’ll not spend too much time thinking about advanced traffic mechanics until it’s done.

Meta: You’re right that traffic management can become a huge part of the game in mid- and late-game. That’s intentional and I hope it can be a very interesting part of city building and production chain management!
However, some players don’t like the extra difficulty, so we will need good difficulty settings.

Quite agree on electronics building speeds - But my own observations are that both the Neural Processor and Home Robot factories move at glacial speeds — with the former being slower than the latter…
While I have reached level 3 and am attempting to build enough Robots to move up to Level 4 , I have the strongest feeling that my city will have to grow exponentially to achieve the leap at all.
Perhaps a less “strenuous” Game could be an “easy” version ?

Maybe this is already in the works.

Could schools be introduced earlier? Workers get trained in them to become specialists. i.e. survival food specialist or electronics specialist.

Which in turn increases the speed of the factory to which they are applied?