Observations after 230 hours of gameplay

First off, would like to underscore how enjoyable of a game this is to play - it has an excellent progression of complexity that keeps gameplay engaging, while still accessible to start. Additionally, the stability and lack of “game compromising” bugs is really enjoyable and unique for an early access game. Below are a few observations from the game so far:

1) “Delivery Only” Transportation Design: only requiring one-way flow of goods (and no flow of workers) creates unique and differentiated challenges and opportunities for transportation network design that are not seen in other games that include transportation backbones (e.g. Cities Skylines / Sim City / Transport Fever). This is such a unique characteristic of the game, and creates ability to design much more intricate and optimized transportation networks, and for me has been a large source of continued gameplay. Therefore would hope that this is retained as a feature to this game, rather than “adding” features to make the transportation design more similar to existing games.

2) Endgame Resources: the endgame becomes quite constrained by limitations on availability of “specialty” resources, most acutely Iridium, and to a lesser extent Aluminum and Uranium. This prevents ability to produce a city / production regime that would support say two (instead of only one) Adamantine mine. I don’t have an easy solution here, as the scarcity (and geographic distribution) of the “specialty” resources is part of the excitement for developing mid to late game settlements. That said, some ability to access more in the very late game could add an additional layer of gameplay. Some possible ideas: (i) ability to “spend” Adamantine to create new resource deposits, would then eventually allow creating more resources to ultimately build out and support additional Adamantine mines, (ii) late-game research to unlock resource-rich additional map space, (iii) late-game “super mines” that have 2-3x production of Large Mines (and potentially with correspondingly increased worker and power consumption).

3) “Easy” Transportation Can be More Difficult: though the “Easy” transportation setting does significantly decrease traffic, it can make maintaining upgraded building levels much harder. Have not figured out the precise mechanic, but there appears to be two conflicting challenges for supporting residential buildings: (i) reordering resources seems to be delayed (or not prioritized) until a full shipment is required (in easy mode, 4 units) and (ii) when get down to the “emergency” low level, additional shipments are triggered, but when they arrive, the extra goods are forfeited / disappear, given two shipments (of 8 goods) would exceed the 6-unit holding capacity of residential buildings. This then results in potentially needing significantly more production capacity to support the residential areas, and may also require exceptionally short trip dispatch times (as the re-order is at 2 units remaining instead of 4 units remaining as in “Medium” mode). The short trip dispatch times can actually make the design of the transportation network more difficult than on “Medium” or “Easy.” Similarly, the over-build of production capacity can make overall gameplay more challenging. Would suggest increasing storage capacity at residential buildings to at least 8 (2 truckloads) or potentially 12 (3 truckloads, matching “Medium” difficulty) to make “Easy” mode actually “Easy”.

4) Large Town to City Level in Mid-Game: the transition from Large Town to City is by far the most time and resource intensive transition in the game, and feels much more challenging than even the steps in the endgame. This level requires three major components, each of which are of much higher complexity than any other level transition:
(a) Resources for Habitats: includes three (versus two) resources for habitats - High Quality Meal, Home Robots and Stadiums. Notably, Home Robots require the Neural Processor production tree, which requires a massive increase in input resources, workers and transportation network complexity.
(b) Yellow Science: implementation of Yellow Science is much more complicated than Green Science (or even Red Science) by requiring the Neural Processor production tree. Though the same production tree as for home robots, undertaking for both simultaneously can require a truly massive increase in size and complexity at one stage.
(c) City Re-Design: access to the (i) Particle Filter and (ii) Six-Lane roads and Superhighways, facilitates a major re-design of the city layout. Achieving Particle Filter allows re-build of the city where oxygen can be focused on habitats (allowing for no more “outgoing” goods from residential areas), and decreases needs for Carbon at industrial areas. Additionally, given the intense carbon requirements of Nanotubes, you must significantly over-build Atmosphere Processors to support nanotubes to create Yellow Science to research Particle Filters, and then replace all of those Atmosphere Processors with 50% as many Carbon Filters - this is a pretty annoying step, instead of researching Particle Filters to prepare you for Nanotubes (as most other research prepares you for the next level), you build Nanotubes to research Particle Filters, to then only re-build the supply chain for Nanotubes. Six-lane roads and superhighways allows for modifications in overall city design and layout.
Given these three elements, this is by far the most challenging level to play through. Would consider potentially accelerating some elements to Small Town (e.g. Particle Filter in preparation for Nanotubes) or delaying some to City (potentially High Quality Meals) to have a more consistent challenge in the gameplay across levels.

5) District Production Summary: as some other threads have suggested, functionality to see production summary at individual district level, versus only in aggregate, would be quite helpful. Particularly given the building-adjacency boosts, ability to see how a specific district is over / under producing would be handy, versus the tedious task of checking production percentage of each building, entering all into excel, and then confirming utilization (particularly with adjustment offered by recycling centers, which further complicates calculations).

6) Variable Height Residential Buildings: the height increase to Lvl 6 buildings often creates clashes / interferences, requiring moving buildings in the late game (which can also mess-up a nicely packed / densely packed residential area if the ground is not completely flat!). Would be nice to have some feature to either have less intense changes in heights, smaller form factor for the Lvl 6 buildings to reduce risk of collision, or ability to “smooth” underlying ground to avoid such collisions.

7) Roadways Through Resources: when building a road through resources (either to attach mines or if building over sulphur deposits in large plains), the roads are (i) difficult to see and (ii) often can completely or fully obscure an intersection so cannot optimize routes through the intersection. May be helpful to have the roads appear on top versus below the resource deposits.

8) Train Station Direct Throughput: allow goods delivered into a train station on roads to be dispatched back out immediately to output roadways, rather than requiring those goods to take a trip on the train. This could help simplify some train and transportation network design, and avoid a time consuming “extra” train trip.

Hope these are helpful, and appreciate additional thoughts / comments / concurrence / disagreement on any of the above. In case not abundantly clear - this game is great to play, and quite excited to see how it continues to evolve!

I only skimmed it for now, will read the full thing later.

Thank you for the quick review and thoughtful responses. For (8) see below screen shot - in this case some Nanotubes are being delivered to a train station that are then sent on a loop out and back on a train, and finally then back to roadway from initial station to final delivery. Skipping the interim train loop step would be helpful to accelerate the delivery.

Enabling the skipping of the out-and-back added train run, however, would allow for a “hack” to use a train station as a complicated interchange without actually building one out. This may be viewed as a feature for some, though also does change the complexity of highway management. 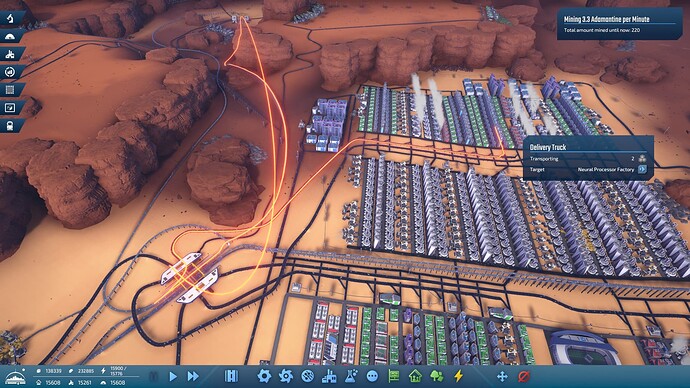 I see. In your case the inteded solution would be giving the cars a direct road without having to go through trains.

Is your dashboard panel on the bottom always this light blue? It should be the same color as the rest of the UI!

In the case of (1), I’m thinking it’s really a result of the way you are able to design roads and the game being a “walker system.”

By “walker system” I am referring to the way some really old city builders worked: The Caesar series of games (although I think Pharaoh was more well known) had people walking from source to destination carrying a resource. Granted in this game it’s vehicles and not people walking, but it’s the same concept.

This is a bit in contrast with many other games which just give you a statistical overview of what’s happening under the hood.

This game does give me vibes of Caesar 3, which is actually my favorite city builder.

But it is interesting that at the moment, the game is “delivery only” so to speak, with people driving to / from work not simulated. The traffic would be vastly heavier if such drives were simulated. In fact, I seem to recall Caesar 3 was the same way - it had no day / night cycle, and only simulated the movement of goods and services.

This actually has me wondering now if Caesar or Pharaoh may have been an inspiration?

In the case of (8), I’m wondering why not just create a bypass road? How it currently works makes sense - train stations aren’t really meant to be a replacement for an interchange.