Has anyone else noticed that since going to the bigger map, we have lost all the cliff walls, dunes and various build levels. I thought that these would have been migrated over to the larger map and was looking forward to utilising the Gondolas to access the different heights.

Also there seems now to be less variation, with about 80% of the map being Desert… where are all the plants and grassed areas we were promised… just stuck in little circular areas dotted around like Spots

There needs to be a rethink over the environment… bring back the cliffs & dunes and make larger Savannas, Jungle(ish) areas with the new plant life available…

Please can you look to address this to make the most of all the Good ideas you have had so far.

My biggest thought on the new maps is the lack of resources and all the new items on the map that block access to the resources until you blow them up with the laser in space.

I am having a hard time with the new maps. Other than resources being scarce and spread out everywhere, the lowlands where one usually builds is covered in rocks that prevent building.

At first I thought that the new laser would help but it is excruciatingly slow.

Why is the laser so slow? I changed my game settings so it would run in the background and it’s been running for hours trying to clear the rocks. I don’t get it. 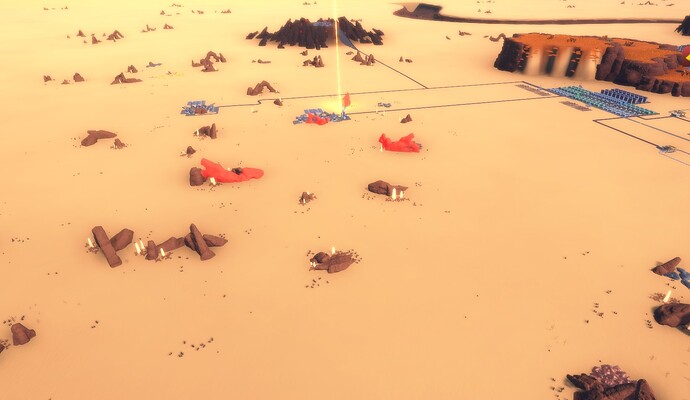 Big time - all the maps Im generating are really scarce of resources, all small pockets and some not even available for almost 1/2 the map… someone forgot to up the resource spawn code when they increased the map size lol

I agree with all regarding res spawns, but also need more variation in elevations, Vegetation spawns etc, its like building on a large sheet of paper now…