Materials in need and mine outgoing storage full, but no trucks moving

Hi! LOVE the game. But I’ve got a bug that I can’t figure out why it’s doing it or how I could work around it. In a few different places, I have factories that either need materials or periodically pop up needing materials. And the production says I’m mining enough. And I can find mines that are paused because their outgoing storage is full. And still, the material won’t be delivered to the factory. I assume that sometimes, I’ve made too many one way roads and so it’s not connected to the factory - so I’ll trace the way over and can connect it. And still the same thing. I try to force it with districts. I open up one way hyper roads, or set it so it can only be delivered by train. Still nothing. I’m going to email the save (the forum won’t allow an upload) - the file is Sappho Alpha. And we’ll orient the map with the Adamantine Drill being the South East corner. In this save in particular, I’m having a terrible time getting aluminum to the AI factories on the Western Edge. And now I’ve got a direct road from a sulfur mine to the four factories that need it. And it won’t budge, other than an occasional truck or two. Districts didn’t help either. 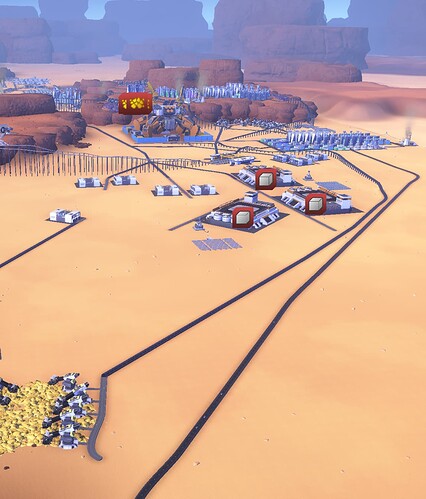