Is it possible to transfer materials from one train line to another?

The image below is from a world I made for testing. The green and red stations on the right send materials to the magenta station near the middle, where the materials are supposed to be transferred to another train line so they can go to the blue station on the left. 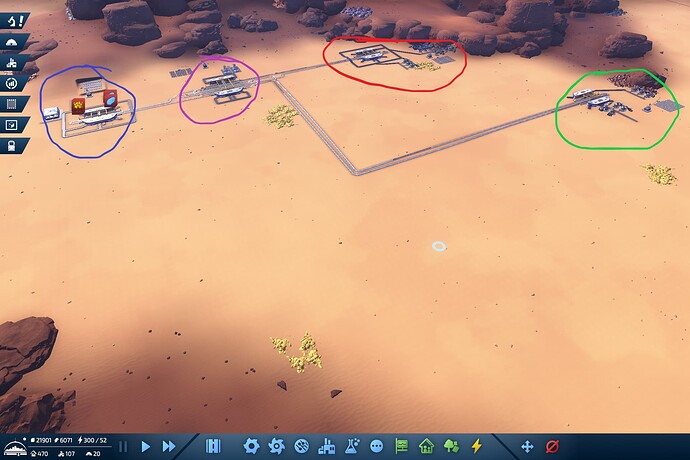 I was testing this because there are various places in my main world where I’m considering using this basic idea.

Is there a way that I can have the materials actually switch lines at the magenta station, or would I need to get rid of it and connect the red and green stations directly to the blue station?

I’m sure someone will correct me if I am wrong but I think it will work as long as there is demand at the Blue station for the resources being supplied by the Red and Green stations. I use this kind of setup and it certainly seems to work for me. In your image you seem to have Copper being mined at the Green station and Iron Ore and Sulphur being mined at the Red station area. I can’t seem to see any demand for the copper so it is possible that the Line from Green to Purple will run empty untill there is a demand for the copper. Hope that helps.

Yes, goods will transfer lines at the station they deem most convenient. As long as a path exists from A to B to C to D to E, the trucks will find it.

I was gonna test it with science, but I decided to instead do it with concrete and steel. The green station has sand miners as well. However, none of the resources from either the green or red stations are going to the blue station.

Do you know why that isnt happening for me here? None of the goods from either the red or green stations are making their way to the blue one, despite the fact that the blue station is demanding resources from both (iron and sulfur from red, sand from green).

Just make sure you have valid train lines and you have actually added trains to all the lines. I assume you are hoping that trains from Red and Green are going to drop off at Purple and that the line form Purple to Blue will make the Transfer? I had a similar problem but when I checked the Trains Line set up. One of the Stations was Highlighted because there was a bad connection on the line. Mine all seem to work fine as long as I have made no mistakes with the set-up of each line and have allocated trains to the line. I have something like 10 different lines running with many interlinking stations and some goods have to transfer lines up to 4 times to get to their destinations.