Yes, I really like this game. It’s a lot of fun even though it isn’t finished yet.
There are however a couple of things that bug me that I hope can get some attention in later updates.
Also I have a lot of ideas to improve the game and some wild ideas that you could just ignore, but I wanted to throw out there anyway.
Do with this what you will.

Things that bother me:

Suggestions to improve the game:

Wild ideas for the future:

Add an option to districts to deny factories outside the district to deliver to the district.

Create an arrow from the district and point to within the same district to forbid exports.

Thanks for the other points!

Hi Daniel, thanks for taking the time to reply.

I know the function you’re suggesting, but it’s not what I meant. I would like to prohibit delivery to a district, without having to create other districts and set their export rules to not deliver to that district.

In short, I do not want to forbid exports, but imports.

You have to district everything. You you make a steel production district and drop arrow to itself, than it won’t export to anything than the district is in and other districts you might connect. So you have to kinda think backwards, and it can get a little bit tedious with a lot of districts, but that’s the way to ban imports. So Daniels answer is still correct.

I’m not saying it’s not possible, I’m just saying it could be a lot easier if you could just ban imports.

Things that bother me:

Suggestions to improve the game:

Nice Points!
The one with traffic entering buildings: Do you mean roads with more than 1 lane per direction? Because I like it that traffic can enter a building, even when it needs to cross the incoming traffic lane (in real life I do it sometimes myself, too). Still, it would be nice, if we could make traffic rules for buildings, like we make them for intersections.
Also I like it that “buildings” are buildable even when they collide - devs please keep it that way (at least as an option), because I find it much easier to place a building and correct it, instead of “trying again” placing it or even make a makeshift build to fine tune the placement overall (like energy lines or (different) roads).

I am also all for roundabouts, no disappearing trucks and a smaller(!) district brush! =)
Still, I would rather not have building or road maintenance. As a option, no problem, but not so much as a standard. Rather I would want to see storms, fires, meteors, … which need to be dealt with and which force us to reallocate resources (so a kind of maintenance through the backdoor in form of repairs, fire fighters, “shields”, point-defence guns, …).

Nevertheless, great ideas and an awesome game - I am looking forward to see more of it =D

Do you mean roads with more than 1 lane per direction?

Yes. Look, they use all three lanes to enter the building. 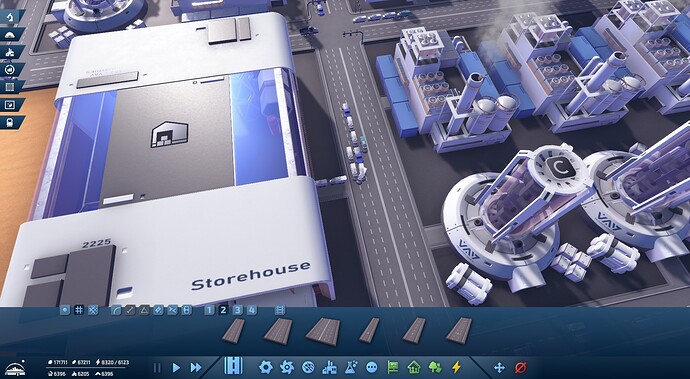 Now I simply build a 1-lane road parallel to the main road and have trafic enter that way, but it uses up more space.

I’m not saying it’s not possible, I’m just saying it could be a lot easier if you could just ban imports.

I always put the whole map in a district at the start, jk 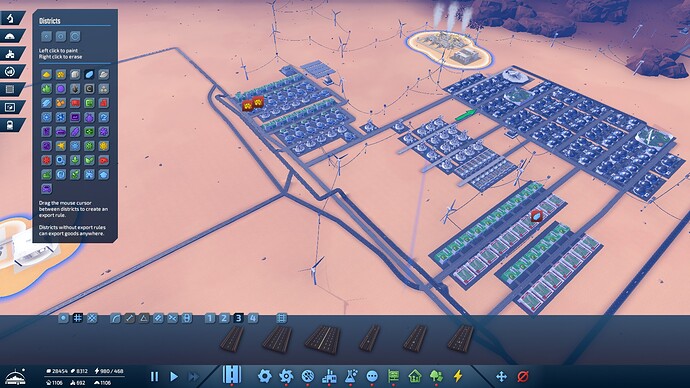 Well, I’m beginning to suspect that setting up districts based on production lines is the way to go. So all the buildings needed for red science (that’s a lot of buildings) are put into one big district and prevent export for each resource.
If you do that for other production lines as well, it’s gonna work. But it is an all or nothing aproach which wont be to everyones taste.

Ok, I have something new and I don’t wanna make a new topic for everything and I suspect by now the devs have a shortcut to this topic on their desktop anyway (/s), so here goes: 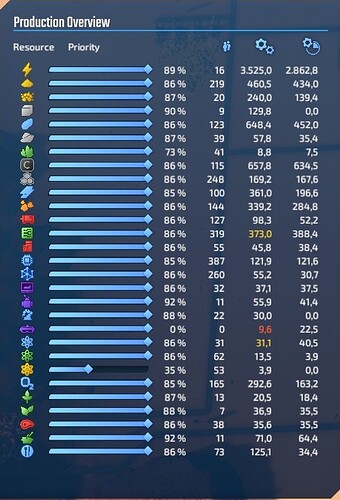 So, an easy way to fix that would be nice.

I think that a simple priority toggle, like a togglable star icon next to a resource would be sufficient in most cases.