Today I’m going to be answering some frequently asked questions.
Currently, 3 out of 6 people are on vacation and the rest is working on a secret project, so the progress on InfraSpace wasn’t that exciting in the last few days. The good news is that we’re planning to announce the secret project next week and its completion will free up another programmer for InfraSpace!

I think we already got somewhere between 50 and 100 requests to add Mac support for InfraSpace. It is coming, just not during Early Access! The reason is that we still want to focus on the main game, its features, performance, and bugs instead of spending that time playtesting and supporting different platforms.

This will change when we hit 1.0. At that point, we won’t change the core of the game that much anymore (like adding a full new map and terraforming). And with fewer changes it becomes easier to support more platforms.

However, some people have got it working with Mac already using virutal machines and I have reason to suspect that after the environment update it will already be a lot more compatible.

A lot of people ask us if we can improve the traffic AI. This is a double edged sword: Sure, lane changing could be improved.

But if cars start avoiding traffic jams on their route, we run into a different issue:
If a player has designed a terrible intersection and it starts jamming up, cars would take different routes putting much more load on intersections that typically would be fine. Suddenly, more and more intersections clog up, the city becomes gridlocked and the player doesn’t know where the problem actually started.

We may test a pathfinding variant like this to be configurable in the options, but currently I believe the time is better invested in traffic tutorials and letting player turn down the traffic difficulty if they don’t want to deal with it.

Players have been asking for some kind of tool that gives you more control over the routes cars take and have been wondering if that’s something we want to add. I just wanted to confirm, yes we’re very interested in that even though it’s not on the roadmap. Distribution centers are probably going to be part of the solution, we just need to figure out a design that’s interesting, understandable, and not immediately overpowered. Players already have some control with the districts tool, but it takes some learning to be able to use it effectively.

With traffic lights, trains, and terraforming as the big endgame goal we’re quickly reaching all the promised roadmap items and with pipes, mod support, and gondolas we’re going to have a bunch of the optional roadmap items done as well.
Naturally, some players are wondering what will happen with InfraSpace once we have fulfilled all the Early Access promises and how long development will continue. This is the answer to our best knowledge at the moment:

I hope this satisfies your curiosity to some degree. If you have thoughts on future features or what InfraSpace needs the most besides the environment update and polishing, let us know! 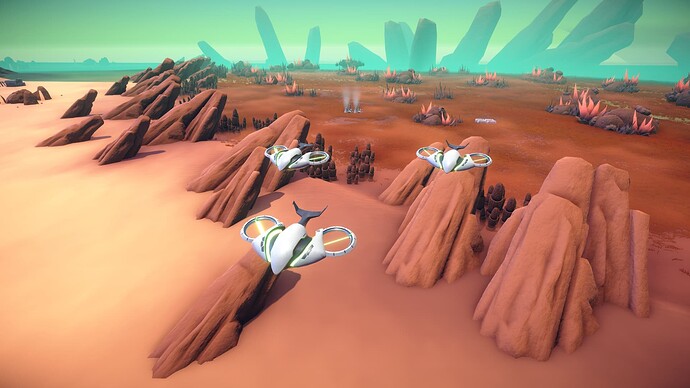 One note on the smarter traffic. I see the point of why you’d want to avoid creating problems in other intersections. But I’ve got a specific incident that I wish it was a little smarter. I’m delivering ore from a set of mines to a block of factories. I have one road in. Because the factories have to be on the concrete roads and I’m delivering on highways or super highways, so the slow down at the transition can cause a back up. My solution was to give the materials a second access point to the block. And hardly any trucks changed paths. They’d sit in traffic for the original access instead of the newly created path.

I think it was already discussed here and imho it might be the best solution: resource request throttling, so basically add a little more storage to factories, so they have more time before running out of resources, so they could be requesting less trucks at the same time, basically spread the deliveries a little bit.

Now especially when you have fast production and long delivery, storage gets empty, huge convoy of trucks leave, they get to the idle factory, process repeats. You constantly get this feedback loops that gets worse when you have more than one type of deliveries on the same road or just plop additional factory.

And often times in factories that need multiple resources it’s just not possible to keep everything close or squeeze in a train station or multiple roads because of the terrain.