These are 3D art concepts of the different biomes and the final version is still open to change.

Don’t worry about the height of the grass: we will cut it around buildings and roads to give the city some space.

The fertilzer required for terraforming will be distributed via autonomous drones. Let us know which one you think looks the best! 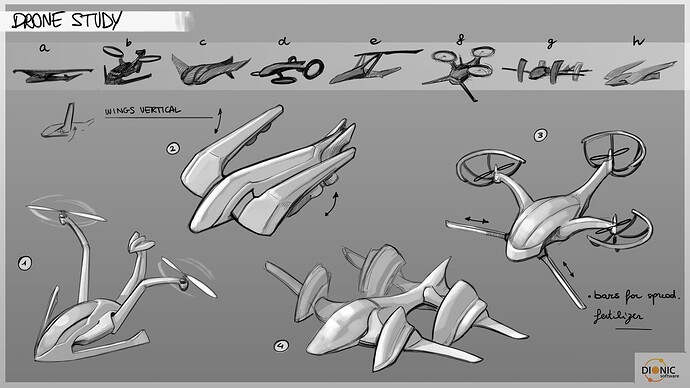 On another note Ben, the programmer working on the new procedural terrain generation, got sick for most of the week, so we don’t have much news there. We wish him a good recovery!

I don’t even play the game so maybe I shouldn’t have an opinion, but for the drones I think 1 or 3 looks most like they could be spreading something over the area. (A minor/random thought - if they’re unmanned drones, they wouldn’t need to have cockpits would they? They all seem to have those… Not that it matters. Though perhaps something looking more like a container would make more sense? To me anyway

If the game was more about terraforming and less about roads and transports, I might even be tempted to play it

Really loving all this terraforming. My favourite is drone 3.

I think that drone 2 looks the best, because it has that futuristic feel, and it has foldable wings.