I hope you’ve been having a great time building with grids and using the traffic lights and traffic signs to get your cars flowing the way you want.

I also hope, you picked a solution for your saves before the update. Reminder: You can keep playing an older save with an older version of the game if the conversion is too tedious for now.
Tutorial here: https://infraspace.dionicsoftware.com/howToChangeGameVersion.html

That being said, we are releasing our third small post-update patch today, which

Disclaimer: Sandbox Mode is not released yet and will be in the next major update. This is a progress post!

While we are not sharing the theme for the next major update yet (give us some time!), we can already share some progress on something that’s near and dear to many of our player’s hearts: 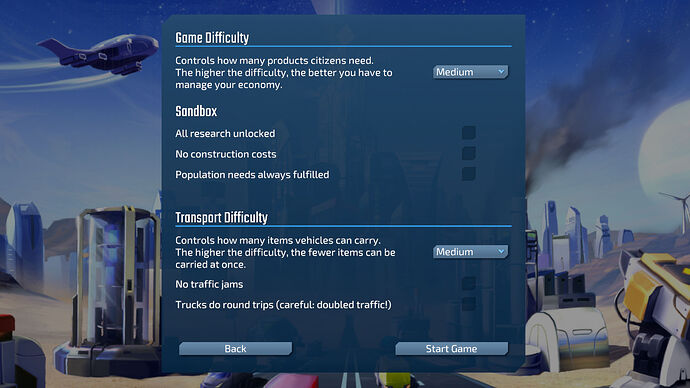 With the next major update, you’ll not only be able to play sandbox mode, you will be able to pick exactly how “sandboxy” your game should be.

Also, for the traffic fanatics, we got another setting: Roundtrip trucks. This will improve realism, but also almost double traffic on your roads!

For anyone without the desire to manage traffic, you will also be able to disable that part of the game completely: Turn off traffic jams by allowing cars to pass through each other if necessary.

That’s it for this week and as always,
happy playing!

No interest in the sandbox mode, but I can see it being welcome by other players.

The Round Trip option for trucks sounds it could make things interesting.

Haven’t witnessed the behavior yet, but have the feeling that I’m going to dislike the zone behavior of stadiums, parks, & schools. Would be nice if there was an option to restore their original behavior.

I was thinking about suggesting round trip trucks, so yay!
Having survived my first mayor gridlock today, I am a bit nervous though. I guess this makes it more important to spread out industries. It will be fun figuring out what works and what doesn’t.

So I have just seen this post and realised the city I have been working on for hours will be completely obliterated when the next big update come out. I indeed followed Daniel steps but when I loaded the early access version there was no worlds saved. This being said is there a way I can transfer a file onto the early access version, or am I just best to start again on that version?

P.S I can not find the Infraspace folder in my C:, been trying to upload a screenshot.
UPDATE: found the folder, never mind

Hi, you probably need to switch to the branch “alpha-8-train-update”. The early access release branch is from October, so that’s too old for your save!

Was very deep (level 5 citizens) when the Traffic Lights update, and realized upgrading the game file would be a nightmare.

Thanks guys, appreciate that. Will look into this tonight.