In this week’s update we’re releasing mostly bugfixes, but also a road building convenience features as well as the Hungarian translation.

After a bunch of weekly updates since release, we’ve begin to shift our focus towards the next big feature: Trains. You’ve already seen some art, but until recently the 2 programmers on our teams have been busy fixing stuff and adding QOL features.

This week, we implemented the rail building system. Check out the results: 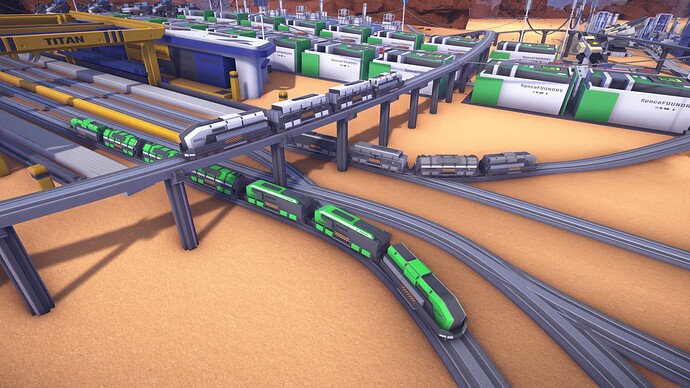 Rail building works similar to road building with some minor differences. However, we couldn’t simply re-use the road code since the traffic simulation of trains works a lot differently. Instead, we had to go through the road code and carefully separate the road construction logic with the road traffic logic. This took a bunch of time since we had to deal with a couple thousand lines of code. Now that we’re done, we can use most of the road construction logic for rails as well and just replace the traffic logic part.

How trains will work

A big question when implementing trains is how complex will they be? We sat down and came up with the following plan:

Roads will remain the most convenient type of transportation (just connect them), but they are more susceptible to traffic. The ideal use for trains is connecting industrial districts that ship a lot of goods between them and take traffic pressure off the roads.

Finally, I just wanted to say that I read all forum and discord posts even if I don’t answer every time. We have plans for stuff that’s frequently requested like grids or grid-like systems for building, but we’ll focus on the the trains first

Until next time! Happy playing!