Hello everyone, it’s time for another another update!

First of all I want to say I’m sorry for the researching bug! Some players experienced crashes or freezes when they finished researching a technology. Typically I’d like to release a quickfix for issues like this, but with the Easter weekend around I wanted to take it a little slower

This week we focused a lot on bugfixes. The traffic engine has to be rock-solid, since it comprises the core of the game so we wanted to prioritze the issues we found there.

When you’re developing games, it can be hard to catch a free minute to do miscellaneous maintenance tasks. You’re either working on a release, fixing the bugs of a release or building the core of a game you want to release in the future.

So that’s why we I took 2 days this week to take care of the server and update InfraSpace to Unity’s newest long term support version. The server maintenance is not completely done, but it’s better than it was before, so I count it as a win. Basically I put our automatic error tracking system into a container so we can migrate it to a new server more easily and back it up.

People have been telling us the atmosphere processors look like wind turbines, so we changed their design to better extract oxygen and carbon from the amtosphere: 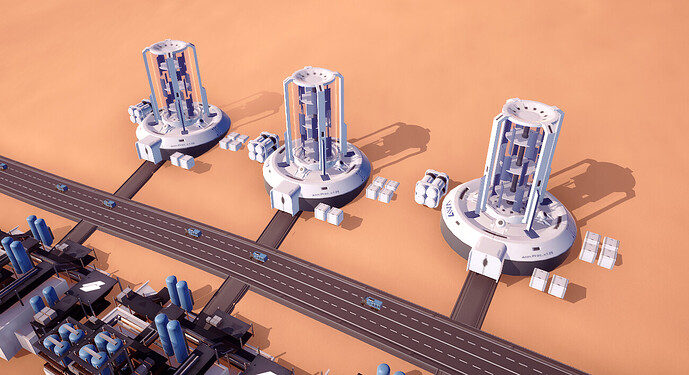 That all sounds great Daniel, going to take it out for a spin tonight. Keep up the good work.

Did inventories get reset with this patch? Many of my buildings were demanding resources that they weren’t before the patch.
Other than that, it’s looking great!

@Indigored some of the fixes for car traffic couldn’t easily be applied to cars that were already on the road. So, this update, we deleted all cars currently on the road if you’re loading an older save.

keep up the good work …N