Any way to make intersection lanes default to all connected?

I’m new to InfraSpace, and more than a few times now I’ve had a gridlocked city because of some badly designed traffic intersections. It wasn’t until I started playing around with the intersections themselves that I realized that they default to having dedicated lanes connected - I can go in and change them, but I have to do that for every. Single. Intersection. And that is super annoying: 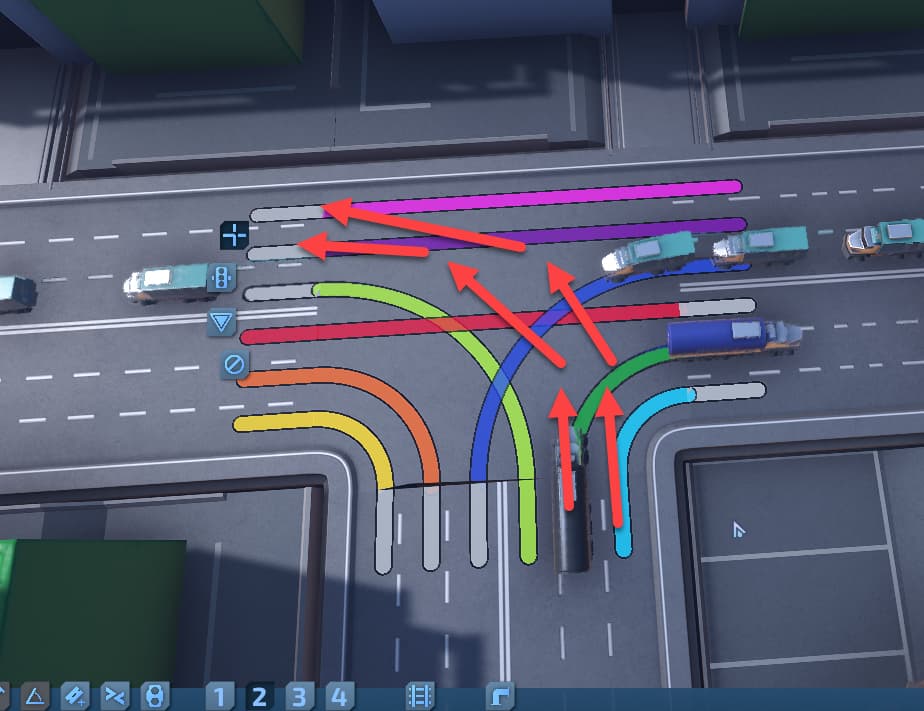 Is there a way to make intersection lanes default to connect in all possible ways, rather than dedicating one lane to left turning?

I have 3 lane roads everywhere, but when I have 200 trucks that want to turn left and the lane is full, nothing moves forward even though there are 2 completely empty lanes still available for use.

This might be ok if the 3 lane roads disallowed any traffic ultimately turning left from using the other lanes, but it doesn’t, so what I end up with is 2-3 lanes of trucks, all wanting to turn left, and using the one lane.

if you want, you can change this per intersection.

drag with your mouse from start lane to finish lane to create a new rule for trucks to follow.

im sure there are tutorials on youtube if u cant figure it out.

Thanks for the reply Jesperr01. My post was asking if there’s a way to set that as default, since otherwise (and as I said originally) I have to go through every single intersection and adjust it, by hand, which I’m sure you know is super tedious and annoying.

Dionic, please consider adding this as a feature or a toggle?

The whole point of 3 lane roads is for trucks to be able to use all 3 lanes, and in a universe where every driver is perfect and there are no collisions, it makes sense for all lanes to connect to each other in a 4-way intersection.

every possible way? like, every lane connects to every other lane?
that would screw up traffic so bad if the ai acted like actual traffic.
Right now that wouldn’t change much, because the ai isn’t exactly good with choosing lanes and would probably not switch or something.

There is no way to change the lanes by default. You have to go manually over all Intersections and change them.
I wish the game developers would improve the default lanes…

I avoid placing 3-way roads whenever possible, because you have to manually go through every intersection to make it useful.